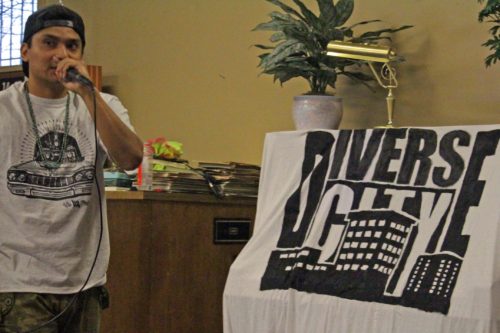 Missoula, MT – 8-years ago a group of EmpowerMT youth helped to lead the charge for Missoula to become the first city in Montana to include LGBTQ people in their Non-Discrimination Ordinance. Every year since then EmpowerMT’s youth leaders have planned the Diversity Day celebration for the second Saturday of April to celebrate this milestone for diversity in Missoula and to showcase youth leaders in our community. This year’s celebration will be held April 15th at the Missoula Senior Center (705 S. Higgins Ave) starting at 6pm.

This year is special because EmpowerMT will be launching a three week advocacy and fundraising campaign to educate the public about issues facing youth and to raise money to continue to empower youth to create change in our community.

“EmpowerMT’s youth played a big part in getting Missoula’s LGBTQ Non-Discrimination Ordinance passed,” says Jamar Galbreath, EmpowerMT’s Youth Programs Coordinator. “While we celebrate this victory we wanted to tell the stories of how youth are making an impact in our community right now.”

“There are two big issues our youth are working on right now,” added Alston Crudup, EmpowerMT’s Youth Programs Facilitator. “Last night 350 people under the age of 18 did not have a home in Montana and 55% of students who have attempted suicide have been bullied in the past 12 months. Our youth want to educate the public about teen homelessness and teen suicide, and talk about what they are doing to address these issues.”

The Empowering Youth Campaign will start at Diversity Day, April 15th and run until May 5th when Missoula Gives concludes. Each week of the campaign, EmpowerMT youth leaders will educate the public online and in the community about teen suicide, teen homelessness and what actions they are taking to address these issues. The campaign will include the following highlights:

Missoula Gives: May 4 & 5 online at https://www.missoulagives.org//organizations/empowermt